Written by Zack Newsome on January 7, 2009. Posted in Spirituality. Leave a Comment 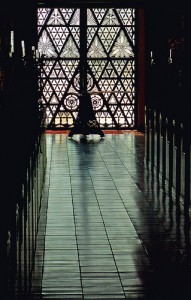 Today I visited the Episcopal Cathedral here in downtown Phoenix for morning prayer. It was really good to walk through the liturgy with others (who are way more experienced with it than I) and out loud. The cathedral is one of my favorite spiritual spaces in the city. The architecture represents Phoenix well, a historic stone building built with a Spanish mission motive. They have a brilliant courtyard in the center of their space that contains a labyrinth and some really artistic stations of the cross. I have a feeling I will be spending a lot of time there in 2009.
After morning prayer, I was chatting with a guy I met name Matt. Matt is the head of youth and young adults for the Arizona Episcopal Diocese. As we talked of the spiritual traditions we were raised in, we realized we both came from protestant, evangelical, conservative backgrounds. He than asked me what led me to come to Morning prayer at an Episcopal Cathedral. I explained to him my recent draw to liturgy as the primary spiritual rhythm of my life. I acknowledged that I didn’t yet fully understand why I’ve been interested in more liturgical forms of faith. He said something interesting:

You can come to faith in the protestant tradition, but you can’t grow to depth there.

These are words that will roll around in my head and heart for a while. I am not sure if it’s that simple, but I certainly can relate – the ways and postures of faith in which I was raised seem to be less than a complete expression. They lack a complete picture of God in an over-zealous attempt to understand him intellectually. Liturgy is void of the attempt of figuring out God and full of the ackowledgment of what we know of Him. Something about that resonates deep within my soul.